A new poll suggests that voters in New Jersey are likely to reject a ballot initiative next week seeking to expand sports betting to include college sporting events in New Jersey or to allow wagers on such events in which a college team from New Jersey is participating.

The poll by the Stockton Polling Institute, part of the William J. Hughes Center for Public Policy at Stockton University, found that 51% of respondents oppose expanding sports betting to include the state’s colleges.

Stockton found that 37% of respondents support the initiative, while 11% were not sure and 1% refused to answer. The poll was conducted via cell and landline by university students between October 17 and 26. A total of 522 respondents were surveyed.

The findings by Stockton align with an earlier poll conducted over the summer by students at Fairleigh Dickinson University (FDU).

In the FDU poll, 100 registered voters in the Garden State were asked if sports betting should be expanded, but 49% said no. Meanwhile, 25% said yes, 23% said they were not sure and 3% either did not know or refused to answer. The FDU poll was conducted between June 9 and June 16.

“This change might have had a better chance in a higher turnout year,” Dan Cassino, a government and politics professor at FDU, said in early July when the poll was released. “But among the voters who tend to turn out the most, there’s just no appetite for expanding gaming yet again.”

“As it is, opposition is some combination of not wanting to change things without understanding the options, and just plain opposition to more expansion of gambling in the state. Supporters have to explain what they’re proposing, and hope that voters are going to buy in.”

The authorization for gambling is enshrined in the New Jersey State Constitution, which is why voters must support an amendment for its expansion. The constitution currently prohibits betting on college sporting events held in the Garden State, as well as games where a team from New Jersey is playing.

The New Jersey General Assembly could enact legislation allowing both types of sports wagering if the initiative is passed by voters. Betting would only be allowed at the state’s casinos and current or former racetracks.

When online sports betting was first enacted in 2018, lawmakers were hesitant to allow betting on college sports. They feared that college athletes would be tempted to fix matches. But many of those fears subsided after the NCAA revised its policies and began to allow college athletes to profit from their name, image and likeness.

The issue has taken on greater urgency in part because Seton Hall University and the Prudential Center will host the East Regional of the NCAA’s Men’s Basketball Tournament in March 2025. It will be the first time that March Madness games have been played in New Jersey since 2011.

Election Day is Tuesday, November 2. In New Jersey, early voting began on October 23 and is scheduled to run through October 31. 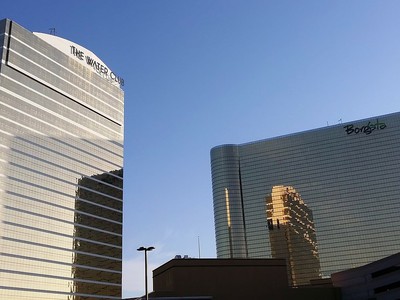 “Dori B.” pockets largest payout in US online casino history after she won the “Colossal Jackpot” on Borgata Casino NJ.

“Exchange the Love” promo in full swing; First peer-to-peer betting exchange in US allows players to set their own prices for wagers.