Downloads of sports betting apps in the US grew about 183% year-to-year in September, reflecting excitement for the new football season and additional states legalizing online sports betting, according to analysts with Morgan Stanley.

Meanwhile, with the first four weeks of the NFL season in the books, GeoComply Solutions reported that US sports betting volumes is continuing to break records.

In a research note Tuesday, Morgan Stanley analysts Thomas Allen and Ed Young reported that the launch of online sports betting in Arizona and Wyoming, coupled with upcoming launches in Connecticut and Louisiana, drove growth in the number of downloads.

They added that trend appears likely to continue. “When we look at preliminary October data (only two days), the app download volume trends are similar to last month, up 161% year-to year,” they wrote.

DraftKings and FanDuel remain the top two operators in the space.

Combined, downloads of DraftKings’ and FanDuel’s sports betting apps represented 59% of all such downloads in September, a small rebound from August, when they combined for a 50% share. August 2021 was the lowest combined share since March 2020, when the tally was 47%. Data from Sensor Tower show that since January 2020, the pair combined for a high of 83% of downloads in May 2020.

Separately, DraftKings accounted for 32% of downloads in September, while FanDuel made up 27%. Both figures were an improvement from August, when their download totals were 30% and 20%, respectively.

The analysts found that Caesars Sportsbook represented 12% of all downloads in September, down from 18% in August, when Caesars Entertainment embarked on a $1 billion rebranding effort.

Downloads of the Barstool Sportsbook also declined to 7% in September, compared to 12% in August, its highest total since September 2020 and only the second month when its downloads were in double digits.

According to the analysts, the higher download number for August was likely due to Barstool entering Colorado, New Jersey and Virginia. The operator was also starting to promote upcoming launches in Arizona and Tennessee. They note that Barstool downloads hit about 18% in the last week of August.

GeoComply said that during the first four weeks of the NFL season, a period that ended on October 3, it processed 330 million geolocation transactions across 18 states and the District of Columbia.

By comparison, the firm processed just 149 million transactions during the same period of the 2020 season. That translates to a 122% year-to-year increase.

“We’re excited to see the growth of sports betting from the first NFL weekend has carried over to the first four weeks of the season,” said Lindsay Slader, managing director of gaming at GeoComply. “The data also confirms the first week in Arizona was not just a one-off, but that the state has solidified its place as the fourth-largest sports betting market in the US.

“With more states poised to come online in the coming weeks and months, we expect growth will continue to accelerate through 2021 and 2022.”

NJ Voters to Consider Expanding Sports Betting to Include Colleges

If approved next month, betting on in-state college sports and games in which a New Jersey college team is playing could be allowed. 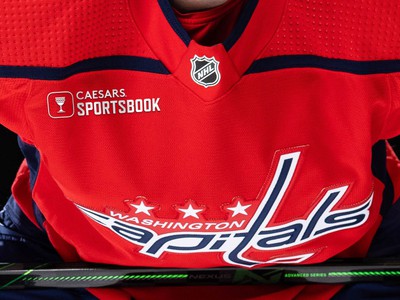 Deal between Washington Capitals and Caesars Entertainment is the first of its kind in US professional sports.